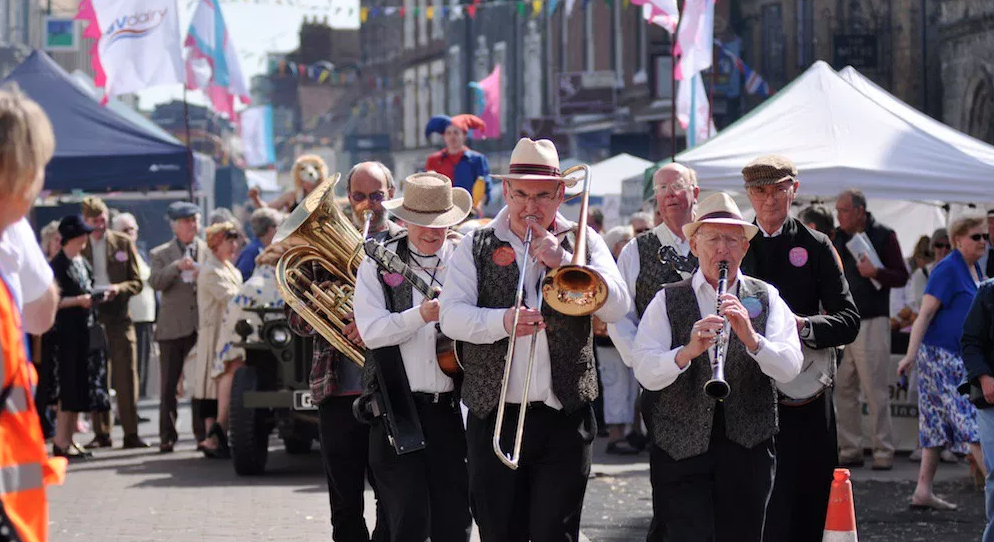 NORTH Dorset comes alive in the summer with a series of superb and well-established shows and festivals that reflect the region’s rich culture and agricultural history. Woodcraft, cheese, steam engines and heavy horses all have their own festivals, with celebrations of music, theatre and outdoors pursuits. Shaftesbury sits at the heart of these bucolic outbursts of pleasure, and is the natural place to base yourself to party.

We look forward to welcoming you to Shaftesbury this summer, #TheHighPointofDorset.

The Cheese Races are the brainchild of Charlie Turnbull of the ubiquitous cheese deli in town – sadly, this is Turnbull’s last day in business, as Charlie seeks new adventures. So let’s make it cracker of a cheese day! Barnaby Cox won the men’s event for four consecutive years until 2017 – will he claim his crown back? Will the firemen take the team title?

The Cheese Races form part of a wider Food & Drink Festival: there will be 100 stalls the length of the town, featuring the Anonymous Travelling Market on Park Walk, as well as producers from The Dorset Farmers Market and Dorset Food and Drink in the High Street.

Live cooking demonstrations will be taking place outside Shaftesbury Town Hall at the ‘Chef’s on Stage’ demonstration kitchen, including David Griffin-Shepherd from La Fleur de Lys restaurant in town.

In addition, there will be live music in Swans Yard, medieval and Maypole dancing in the Abbey Gardens and the Shaftesbury Town Silver Band.

It’s all part of a day long festival of food, fun and frivolity – and it’s FREE! Details: Shaftesbury Festival

MAY 20
THE NORTH DORSET CYCLE RIDE 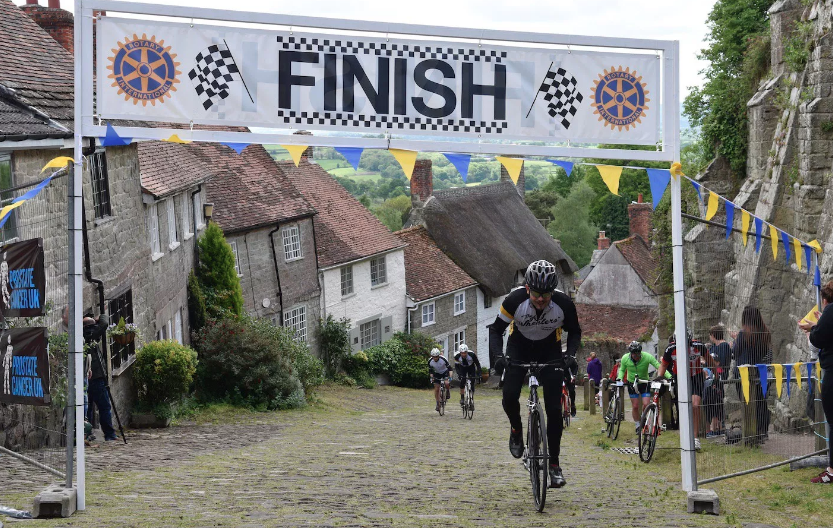 There is a long history of Shaftesbury and the hills of North Dorset attracting cyclists. There were once three cycle shops in the town, and a Cyclists’ Hostel on Salisbury Street for pedallers to retire after their exertions. And the town still attracts them, albeit now clad in lycra and other expensive apparel.

This will be the third year that The Rotary Club has staged this race, starting on Park Walk and finishing up Gold Hill, meanwhile taking in the fabulous countryside cycling. There are three routes, all taking in The Blackmore Vale: a 12-mile family-friendly route, then a 25 or 50-mile circuit. Food, drink and music will be laid on at Park Walk for after the event. The main charity to benefit is Prostate Cancer UK – last year, it raised £2,000 for the charity.

Last year there were 83 events: in 2018, the Fringe has grown to 139 separate performances, making it England’s third largest open access arts festival, behind Brighton and Manchester.

“It’s one month before Edinburgh and that allows comedians to test their new material in Shaftesbury. Stand-ups can’t rehearse alone, at home. They need an audience to gauge which material is funny. That’s why the timing of Shaftesbury Fringe is perfect,” he says.

The Fringe takes place in 25 venues, from an estate agents to a coaching inn and hidden walled-garden. New show additions include a free childrens’ hub in the Abbey Gardens on Saturday June 30. Critically acclaimed children’s theatre company Paddleboat will headline a programme of shows, activities and events designed especially for kids aged 4-12.

The community fair has been raising funds for local charities for 30 years. It’s a great day out, and the opportunity to add on a visit to the Gold Hill Museum and Shaftesbury Abbey Gardens (free access). Lined up is live music in the Abbey grounds, a High Street parade, funfair at Barton Hill, climbing wall and kids’ entertainments and a van pull!
Details: www.facebook.com/Goldhillfair/ 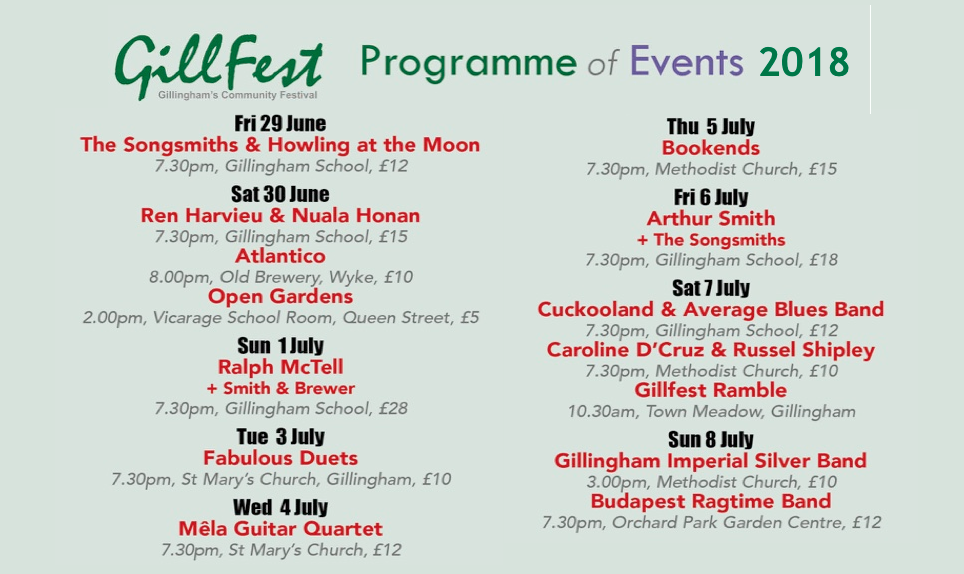 Why not combine The Fringe with GillFest, six miles down the road? Singer Ralph McTell and comedian Arthur Smith are headliners this year, as well as Ren Harvieu, a highly-rated singer with a powerful voice. There are top acts every evening, starting with party band Howling at The Moon and guitar trio The Songsmiths.

One venue for Saturday night is The Old Brewery at Wyke, when eight-piece Colombian band Atlantico kick in with keyboards, percussion and full horn section to bring high energy, Big Band music to town. Or as an alternative, Ren Harvieu and her band at Gillingham School.

Fabulous Duets on Tuesday features two sopranos and a pianist delivering opera and musical duets; The Mela Guitar Quartet on Wednesday are four classical acoustic musicians playing anything from Handel to Hendrix, and Bookends are a Simon & Garfunkel tribute duo (Thursday).

Arthur Smith is on Friday, then two blues and rock bands play Gillingham School on Saturday while local musicians Russel and Caroline play a variety of music, including jazz, at The Methodist Church.

The festival ends on Sunday July 8 with the town’s own Gillingham Imperial Silver Band and, later, The Budapest Ragtime Band. Also look out for an Open Gardens and Rambling event during the week. Ticket prices range from £10-£28: there is an all-events tickt for £80, or a Friday/Saturday option for £35. Details: GillFest

This is the one that the whole of North Dorset’s farming community takes the day off for. More than 24,000 visit, with highly competitive sections for cattle, sheep, horses, dogs, poultry, rabbits, homecrafts, handicrafts, art and a huge range of classes for younger exhibitors, all of which need to be entered in advance.

This year, there’s a new Education Area – Farm, Food & Fun, which aims to show how milk, meat and grain are produced on local farms and how it eventually reaches the table, with lots of hands-on activities. In the Harts of Stur Food Hall there are more than 60 food and drink producers, including a gluten-free bakery specialist, local wines and cheeses, speciality Greek food providers, hot pies to be eaten, beer and cider to be drunk, along with a huge range of takeaway hot foods.

There are more than 520 trade stands this year, a record for the show, with anything from schools to trucks and handicrafts. There are also 100 stands with tractors, machinery and farm suppliers.

There are displays in three rings: the main ring features the Imps Motorcycle Display team. The east ring has a full day of horse showing classes and show jumping classes. In the Turnpike Ring, countryside sports include ferret and terrier racing, birds of prey, sheep dogs and the dog & duck display.

Details: The Gillingham and Shaftesbury show is two miles from Shaftesbury, and runs from 8.30am to 6.30pm. Tickets cost £13 in advance (£16 on the day). 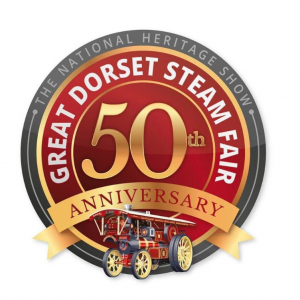 This year is the 50th anniversary of a show that started in a field: now it’s the biggest steam and vintage show in the world, spread over 600 acres of Dorset.

And when it’s such an important milestone, then there should be something befitting such an event…. Which is why the organisers are planning to bring 500 full-size steam engines to Dorset, in what will be the biggest ever gathering of large steam-driven things.

It’s an event to be bemused, bewitched and baffled by hundreds of puffing, groaning and steaming machines of all sizes and shapes gathered together over the August Bank Holiday weekend.

There are steam threshers, cars, rollers and lorries. There is a steam-driven funfair with carousels, ghost trains and dodgems. It’s a celebration of an era, with fairground organs, 1920s dancing girls, illusionists, heavy horses, plough competitions and classic tractors.

There’s more: 100 vintage cars, a six-stage music festival, craft marquee, food and real ale tents. And it runs for five days from 8am until midnight on a massive 600-acre site at Tarrant Hinton, 10 miles south of Shaftesbury. You may have just enough time to see it all.

Details: The Great Dorset Steam Fair. Live updates in the run-up to the show can be found on the GDSR Facebook page 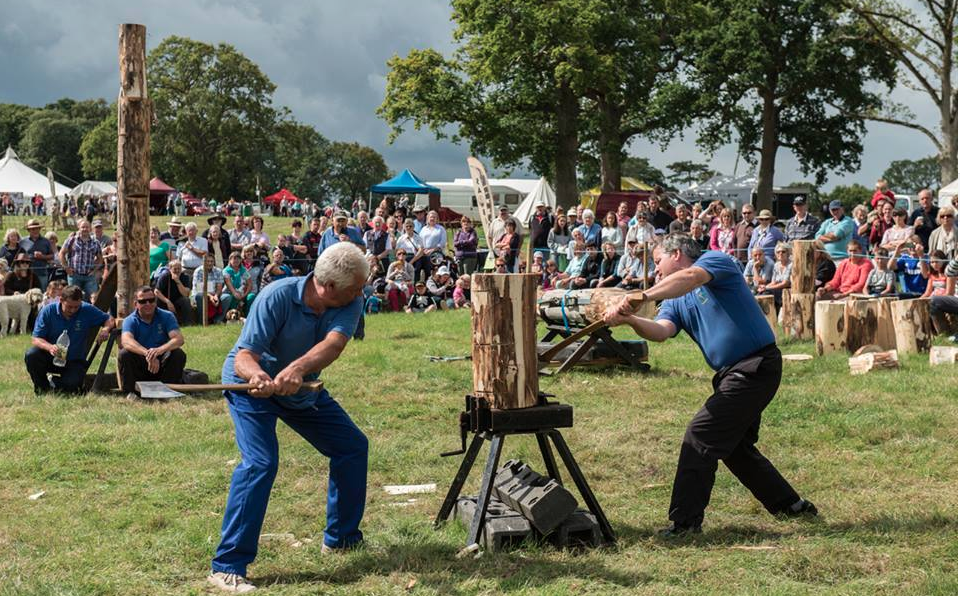 Stock Gaylard Estate is an 1,800 acre country estate with around 300 acres of predominantly oak woodland, 80 acres of common land and an enclosed 80 acre deer park with a small lake. Over the last 200 years, the estate has been used for country sports, and hedgerows and woodlands preserved for that purpose.

Throughout the year the estate offers glamping holidays in yurts, the yurts made locally. And once a year, the estate stages the Oak Fair, aimed at anyone who is interested in woodcraft, timber, conservation and the countryside.

The fair celebrates the trees with a series of workshops, log splitting, logging and carving. There are 180 timber-related stalls. The British Heavy Horse Logger’s team will complete a number of challenges over the weekend; Mere Down Falconry brings a variety of birds of prey that put on displays, and there is Have-A-Go Archery.

The fair also has The Great Big Tree Climbing Company, providing tree climbing and zip wires, while Avalon Axes demostrates axe throwing – as well as letting visitors have a go. Market Square will be stocked with local food and drink producers, and there is a Childrens Area nearby that will have a range of workshops.

It’s the fifth year of the festival, that has grown from small acorns and has ambitions to be an oak. Perhaps not as grand as The Wyndham Oak, pictured right, one of the UK’s most magnificent ancient trees which is named after Judge Sir Hugh Wyndam, who bought Silton Manor in 1641. You can visit the oak on a 6.5 mile round walk from Gillingham.

It is one of eight different walks listed on the Gillingham: Walkers are Welcome website, which include Kingscourt (3 miles), on the trail of King John’s lodge in his medieval hunting forest, and In The Footsteps of Constable, the painter who regularly visited Gillingham.

This year’s walking theme is Rivers and Hills, and the programme starts with a six-mile walk to the Judge’s oak. There are 19 walks in all, more than ever. They range from 1-10 miles, including a circular walk of Motcombe that includes part of the White Hart Link, a waymarked 50-mile circuit which it is hoped will link the all North Dorset towns by 2020.

Other highlights include a seven-mile walk from Stour Row through Duncliffe Woods and an eight-miler from Stourhead back to Gillingham – transport is provided for both from Gillingham to the start of the walks. Part of the White Hart is also included in walks to Gillingham from both Shaftesbury and Templecombe. 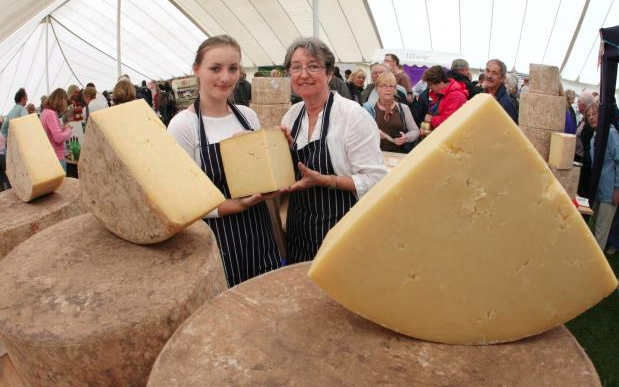 Thomas Hardy referred to the Blackmore Vale as ‘The Vale of the Dairies,’ and its heart is Sturminster Newton where, just two decades ago, 80,000 litres of milk a day was used in cheese production.

Then the cattle market closed after 700 years, quickly followed by the creamery in 2000. Still, the town’s dairy heritage continues with the cheese fair, run by volunteers, and voted best food event at the Dorset Food, Drink and Farming awards in 2016. The fact that the festival’s website is cheesefestival.co.uk shows this festival is important.

There is, as you’d expect, a mountain of cheese and food on show (80+ producers booked so far), with fountains of beer and cider, food demonstrations, music and crafts. More than 10,000 people packed into the tents last year – expect the same in 2018.

No, not big ponies. These are the great working horses, breeds like Shires and Clydesdales, that once dominated the Dorset landscape when harnessed for ploughing or haulage. The event is at Gillingham and Shaftesbury Showground, the same venue as the August 15 show.

It’s one of the largest events of its type in the south-west, and hosts the culmination of regional in-hand and harness competitions. There is also a fayre, fun dog show, wagon rides and crafts. The kids will love them.