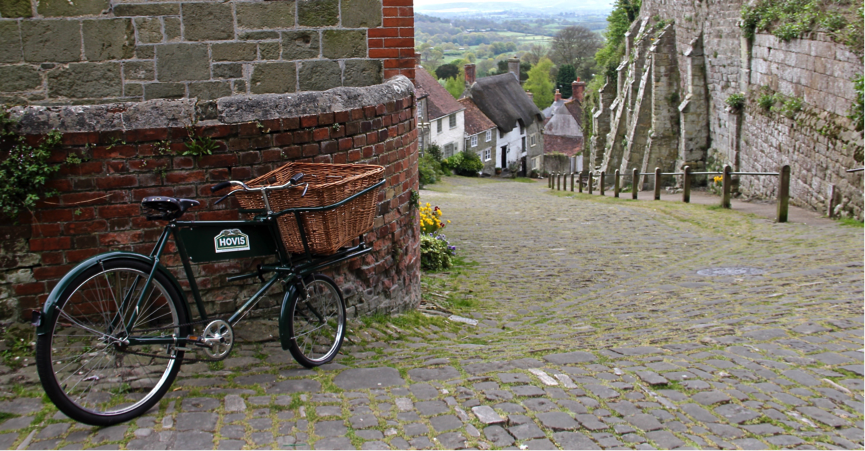 IN 1973, a young film director called Ridley Scott directed a TV advert that put the Dorset town of Shaftesbury firmly on the cycling map.

Not in a Bradley Wiggins sort-of-way, granted, but in a British nostalgia way. The film of a young lad pushing his Hovis bread bike up the cobblestones of Gold Hill to the haunting music of Dvorak’s Symphony No 9 seared into the memory.

Visitors still whistle the tune as they take photos from the top of the hill. The advert has been voted Britain’s favourite of all time. And Ridley did well too – he went on to film Aliens and Blade Runner, among others.

There’s a reason the lad was pushing his bike up the hill: it’s very steep, a punishing 16.2º angle, as cyclists find out every year in The Gold Hill Challenge. Dozens more make the climb throughout the year, even the really steep bit at the top.

Now, there’s an even more rewarding way to cycle the region: Dorset Food & Drink, a collective of the county’s finest products, has devised a series of Foodie Routes, one of which is a 20-mile circular loop of Shaftesbury and The Blackmore Vale. Dorset’s novelist son, Thomas Hardy, described it as The Vale of Little Dairies, in homage to the area’s milk and cheese heritage (Take The Hardy Trail through North Dorset). 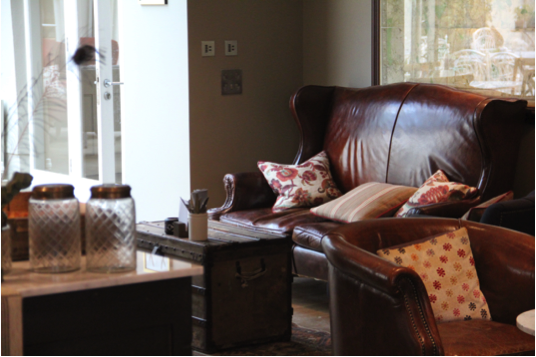 Start your tour at The Grosvenor Arms, an old coaching inn dating from medieval times and recently refurbished. It’s a very comfortable place, full of leather sofas and antlers, and with a lovely courtyard. If you need some carbs the night before your journey, or on the morning of – then try the wood-fired pizza.

Down the High Street is Swans Yard, the creative corner of the town – good for gifts – and home of The Ugly Duckling Café, which recently absorbed Swans Larder, a stockist of local produce. The café still sells a number of preserves from the region and is well worth investigating for saddlebag treats.

You’re on your way. The road north is the least precipitous but the return to Shaftesbury from the south is the steepest. It is is a hilltop town, 215m above sea level. It’s why Alfred the Great chose to build a settlement and abbey here. It means the views to Hampshire, Wiltshire and Somerset are stupendous, but it also means a tough climb up. 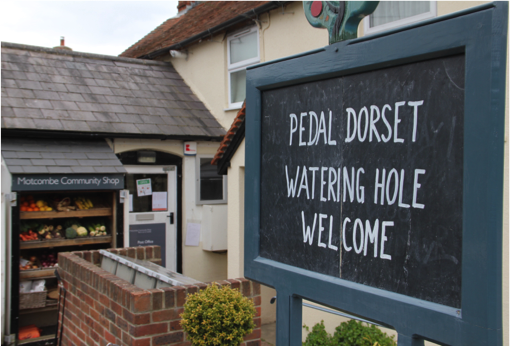 The route north takes you along New Road on to the B3091 road to Gillingham. Just 100m on from the junction, swing right on the bend on to Motcombe Road. This is Route 253 of the National Cycle Network, and meanders gently downhill on a well-made road into Motcombe. Turn right at the sign for the village shop onto The Street, past the village hall and three gloriously thatched cottages and you’ll find Motcombe Community Shop on your left. It’s under three miles from Shaftesbury.

Outside, there are tables, veg and fruit, pot plants and Purbeck ice-cream. Inside, on the counter, was a range of treats from Berry’s Bakes of Shaftesbury, including stem ginger cookies and a bag of chilli cheddars (£2.95). A group of villagers were meeting in the coffee shop (cappuccino, £1.65 takeaway), seated around an open box of Motcombe Community Shop own-label clotted cream fudge. The shop is the heart of the village, with 60 volunteers working shifts to keep it going. In 2010, the previous owners wanted to sell but couldn’t find a buyer. So the village bought it, raising £150,000 – including half the money through £1 shares. The rest came through grants, and the shop has since won a string of awards.

From the shop, the road rises slightly up Elm Hill, still on NCN253. Turn left at the sign to Gillingham. The hedges here are cut low, affording magnificent views towards Duncliffe Wood and Shaftesbury on its ridge.

The road passes The Coppleridge Inn, set in 15 acres of meadows and woodland, a good place to stay on the route. Take care to turn left at the crossroads where the road sign has rotted on three sides, leaving only Knoyles and Hindon signposted – basically, go in the opposite direction, bringing you into Gillingham. 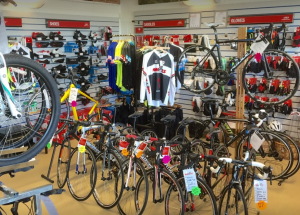 The route picks up NCN 25 and takes you down the High Street. Handily, there is a well-run and friendly bike shop nearby called Wheels of Dorset (01747 825757) on Station Road should you need running repairs or parts. The shop doesn’t offer bike hire, which is a crying shame, as Gillingham train station is just 100m away. But if you bring your bike by train, there’s the option of starting the route here.

The 918 Coffee Shop is next door to Wheels, so you can relax while running repairs are done. Or, at the station itself, you can indulge in breakfast at the No1 Platform Café, winner of the Taste of Dorset best café 2016, and providers of superb £3 bacon baps among many options. It’s open from 5.30am on weekdays and, enterprisingly, you can ring and order in advance (01747 835547).

At the end of the High Street, cycle over the town’s bypass and into the pretty Wyke area of Gillingham. Turn left after 50m on to Common Mead Lane and keep going. The road becomes single track passes Thorngrove Garden Centre and descends between high sided hedges and under the railway line. Turn left for Eccliffe.

This is a pretty hamlet with little traffic, and while the back lanes (Bleet, Folly and Witch Lanes, all marked NCN 25) are high-sided, there are glimpses over farm gates to wide-open fields and views of the Vale. The route takes you into the village of East Stour, the halfway point of the 20-mile route.

You’ll have to stock up on treats in Shaftesbury, Motcombe or Gillingham, as from here on in, hen and goose eggs and other farm gate sales (broad beans at Jolliffe’s Cottage pottery, 50p) are the only sustenance.

Alternatively, it’s a 600m dash from East Stour along the busy and narrow A30 to the Udder Farm Shop. You have to book a meal here (01747 838899), so popular is its breakfast and lunch with produce from the owner’s farm. Toasted beef and blue cheese sandwich followed by Dorset apple cake with clotted cream, anyone?

Resuming the leisurely pace south of East Stour on the NCN25, take the first left on to Scotchey Lane and keep going. The horizons open up here, dominated again by the peak of Duncliffe Wood, an ancient woodland said to have inspired Thomas Hardy to write The Woodlanders. 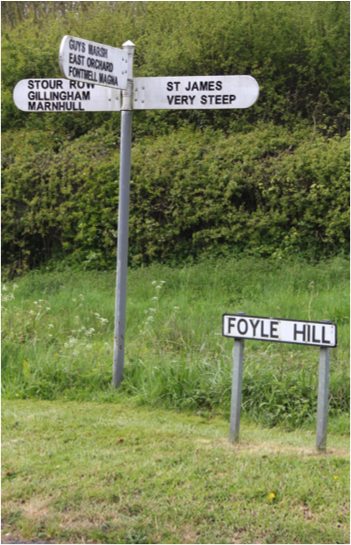 The hill on which the wood sits looms large, and there is a car park, from which paths rise to the summit. It’s managed by The Woodland Trust and is very popular with walkers, drawn in by the displays of bluebells, wild flowers and butterflies – plus the views down Blackmore Vale. 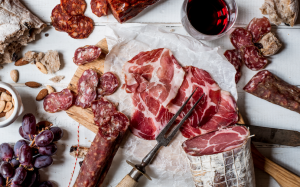 From the next village of Stour Row, the route runs for six miles on Vale flatlands along the NCN25, then north on the NCN253 back to Shaftesbury. It takes you past The Real Cure, an excellent charcuterie sourced from Dorset venison. There is no shop as such but, if you ring James in advance (07970 000681), he’ll try and accommodate you. Otherwise, you can buy online, or at Fortnum & Mason.

The alternative route from Stour Row is a three-mile ride straight to Shaftesbury, heading due east through Cherry Orchard. The signpost directs you on to the busy A30, which isn’t great, although it’s possible to come off near town and head up the steep Tout Hill, the original road west out of Shaftesbury.

Alternatively…. you can ignore the sign to Shaftesbury via the A30 and head straight on to Foyle Hill, leading up to the town’s St James parish. It’s not often you see a signpost saying ‘very steep’ – but this is. The climb continues up St John’s Hill to the town, a 14º angle.

The other option, after you conquer Foyle Hill, is to head on upwards along St James’s Street to Ye Olde Two Brewers, a very welcome sign.

As it happens, the pub is a few revolutions away from the base of Gold Hill, an apposite way to finish your journey. It takes around 40 seconds for serious cyclists to climb the hill, including the grueling last 10 metres up a narrow alley to the High Street.

There is a lovely lunchtime restaurant, The Salt Cellar, at the top of the hill. And another pub – The Mitre – to your right, where you can revive on the terrace and look back over Wiltshire to admire how high you have climbed.

And while you’re in North Dorset, why not spend the night in Shaftesbury? The Abbey and Gold Hill museums are well worth exploring, and there are several options for places to stay and eat (shaftesburytourism.co.uk). Go on – you’ve deserved it.

For more options when exploring Dorset, check out www.visit-dorset.com