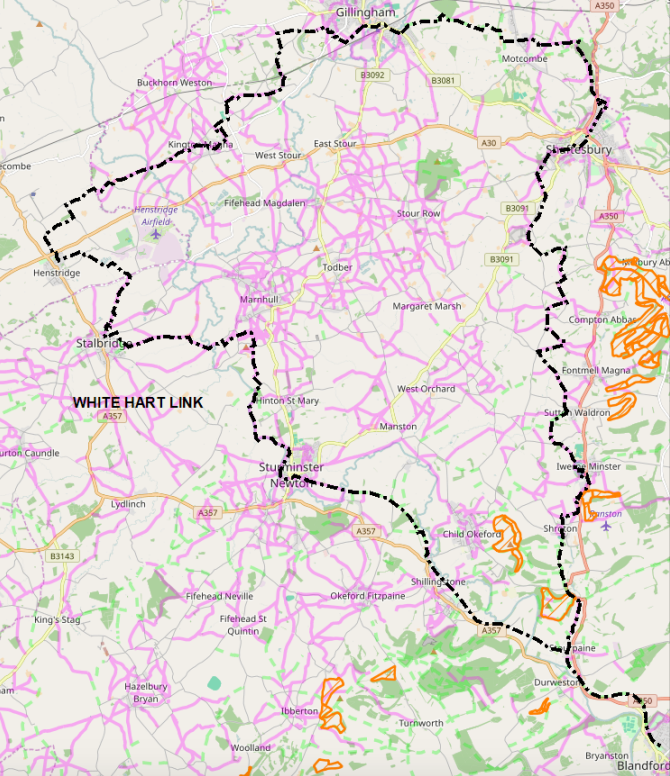 AN ancient royal forest and a new 50-mile trail are the focus of this year’s nine-day Gillingham Walking Festival.

It’s so named as the Blackmore Vale was once known as the Vale of the White Hart, a “creature whose rarity and beauty have attracted, in legend, a wealth of mystical and royal associations,” says a report in The Guardian.

It was also described by Thomas Hardy in Tess of the D’Urbervilles. “The Vale was known in former times as the Forest of White Hart, from a curious legend of King Henry III’s reign, in which the killing by a certain Thomas de la Lynd of a beautiful white hart which the king had run down and spared, was made the occasion of a heavy fine.”

The route was officially unveiled in April, and now the hard work begins. Working with the Dorset Countryside Rangers, it is envisaged that the whole 50 miles, using footpaths and quiet lanes, will be established and ‘route-marked’ within four years.

But the inaugural walk takes place on Sunday September 3 as part of the Festival (September 2-10), when hikers will set out from Stalbridge to walk the nine miles to Gillingham across the Blackmore Vale, through the village of Kington Magna and down to the River Stour and Gillingham.

The complete route will introduce visitors to the Hardy locations of North Dorset and several tourism highlights, including Sturminster Mill, the North Dorset Trailway and Gold Hill, Shaftesbury.

And it is another option to explore the area, alongside the 20-mile food and drink cycling tour of North Dorset which launched this summer.

SOME 800 years ago, the forest between Shaftesbury and Gillingham was a royal preserve, stocked with deer, venison and other game hunted for sport and the royal larder.

King’s Court, a palace was rebuilt under King John and Henry III. From the forest, timbers were supplied to royal buildings, the abbeys and shipyards – little remains, although there is the outstanding Wyndham’s Oak. 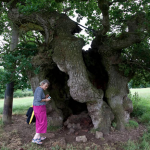 The tree is named after Sir Hugh Wyndham, who bought the Silton Estate – in which the oak stands – in 1641. The gnarled, twisting trunk with a thickened waist could be 1,000 years old, it could have marked the edge of the Royal Forest. It could have been saved from felling due to its huge girth back even then. We know not: but we do know that an acorn from the tree, planted in the same field 40 years ago, and now flourishes in the same field as its parent, says The Woodland Trust.

Interest in King’s Court and the forest remains high, and Dorset Wildlife Trust says it hopes to work with landowners to plant new trees, copses and even in some cases change the use of the land, says one local report. A seven-mile walk of the Royal Forest takes place on Saturday September 2, and another seven-miler of Duncliffe Woods and the Royal Forest from the south is available on September 4.

There are several other walks, some circular, some one-way and back on the train to Gillingham. Most of the walks are free but some charge a nominal amount. Some walks also need to be booked up in advance – check the website and link through to a PDF of the festival. 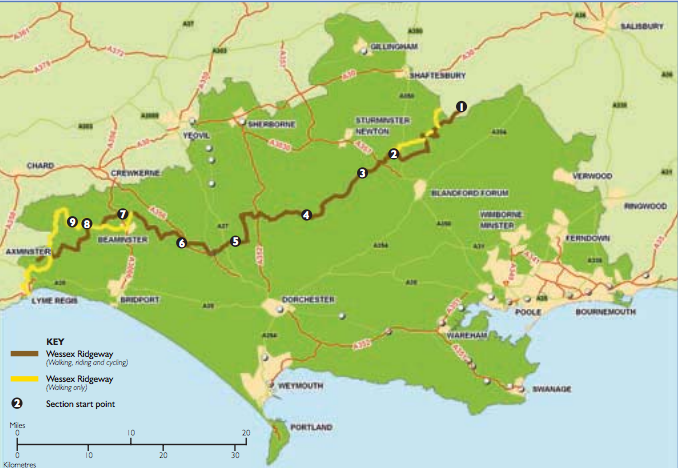 IT starts at Ashmore, south-east of Shaftesbury on the Dorset-Wiltshire border, then takes a stunning 62-mile route high on the chalk ridges across hill top forts, dropping into valleys and eventually falling onto the coastal plain around Lyme Regis. The Ridgeway Trail was developed by The Ramblers’ Association in the 1980s and has been developed for riding and cycling as well as walking.

THE Somerset and Dorset line linked Bristol with Bournemouth and Christchurch before it closed in 1966. Happily, some sections of the trail remain open to walkers, cyclists and riders. It extends nine miles from Sturminster Newton to Blandford, via the old station at Shillingstone, where a small cafe operates three days a week and an old carriage has been converted into seating. Blandford St Mary to Spetisbury is three miles, and there is another small section open at Stalbridge.

STURMINSTER Newton, one of the towns on the White Hart Link, has produced a series of eight circular walks from 1.5 to 5.5 miles. It’s a beautiful part of North Dorset, with the River Stour flowing through and the land rising all around on the edges of the Blackmore Vale.

One response on “A royal forest and a new 50-mile trail: the Gillingham Walking Festival”