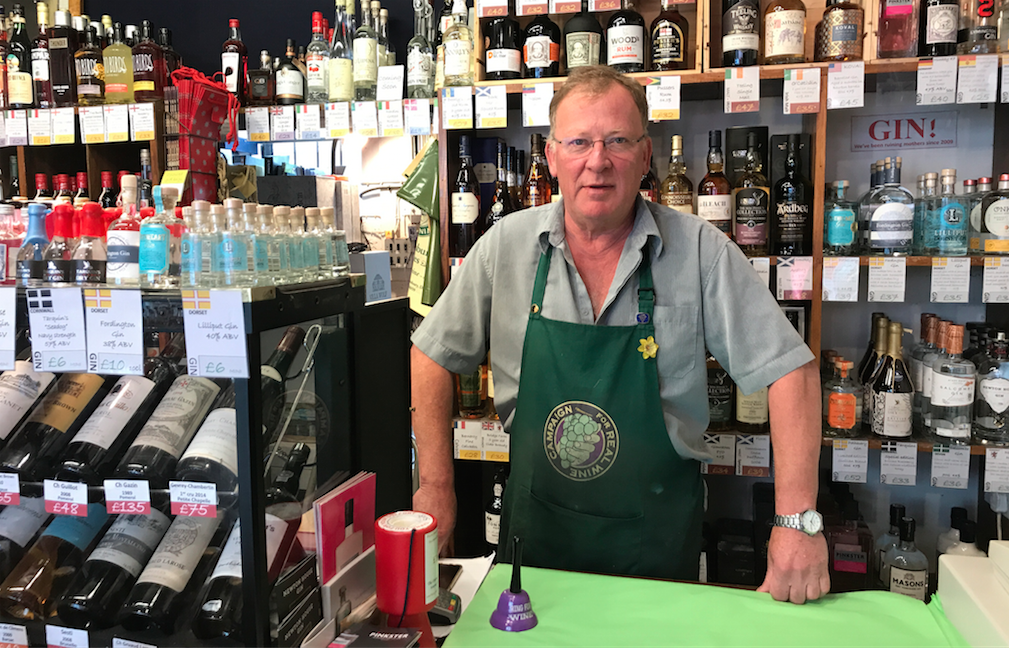 Across Dorset millions of apples are now being harvested, washed, pulped and pressed, in preparation for fermenting, blending and maturing over winter before finally being bottled and sold to an ever growing army of cider enthusiasts.

As with craft beer, there are now a number of small cider producers striving for excellence rather than huge volumes. Nostalgic apple varieties such as Morgan Sweet, Tom Putt, Black Dabinette, Yarlington Mill, Tremletts and Kingston Black have re-appeared on the hillsides of North Dorset – not particularly great to eat but perfect for pressing. 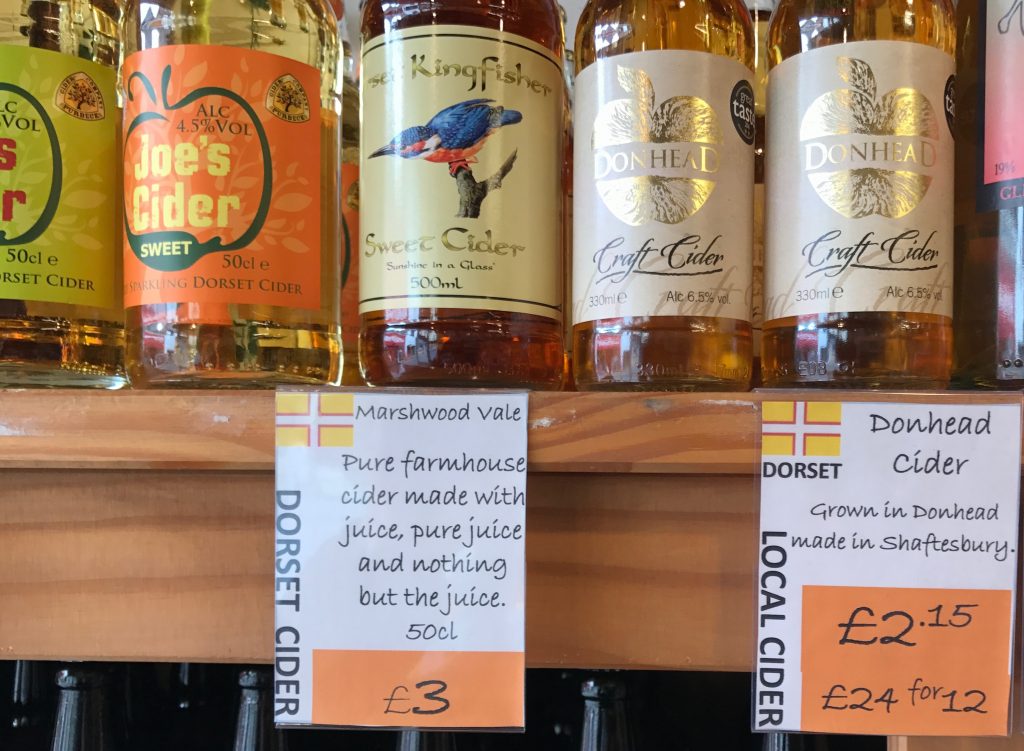 One such start-up is the Donhead Apple Company . Kevin Wood and Gavin Tait have planted 800 trees in a field east of Shaftesbury in the past six years, and now produce a 6.5% bottled craft cider (£2.15 at Shaftesbury Wines) and an 8% sparkling cider, as well as a draught festival cider. The sparkling won a gold medal earlier this year in the International Cider Challenge.

As well as the Shaftesbury shop, they sell through a dozen local outlets such as farm and village shops, as well as the local pub, The Forester in Donhead St Andrew. You can visit the orchard by appointment. And in January, the orchard hosts a wassail which has become one of the largest village gatherings of the year.

Said Gavin in a Telegraph interview: “We all gather in the village hall and walk through the orchard serenading the trees. According to West Country traditions, it secures a plentiful harvest – but for us it’s mainly an excuse to have fun.”

David also stocks bottled ciders from old friend Tim Beer at Marshwood Vale Cider over in West Dorset, who prides himself on the traditional process of hand-picked apples, straw pressed and kept in oak barrels.

Other Dorset ciders listed as finalists in the Taste of Dorset Awards 2017:

* Cranborne Chase Cider: A four-acre orchard on the Rushmore Estate five miles south-east of Shaftesbury. Can be purchased from the farm shop, at 83 Minchington, Blanford DT11 8DH – open most afternoons or phone if making a special trip (01725 552715).

* Dorset Star: At Chalmington, north of Dorchester, cider maker Dan Green took on the orchard four years ago and is now planning shepherd huts for visitors and a Dorset cider trail map, linking up with other producers in the county.

* Twisted Cider: Ben Weller started producing cider commercially last year and now has four labels – dry, misty, sunset and wild. He grows his apples on his parents’ farm at Longburton, south of Sherborne, and it can be bought at the farm gate by arrangement. Outlets include the excellent Digby Tap pub in Sherborne. 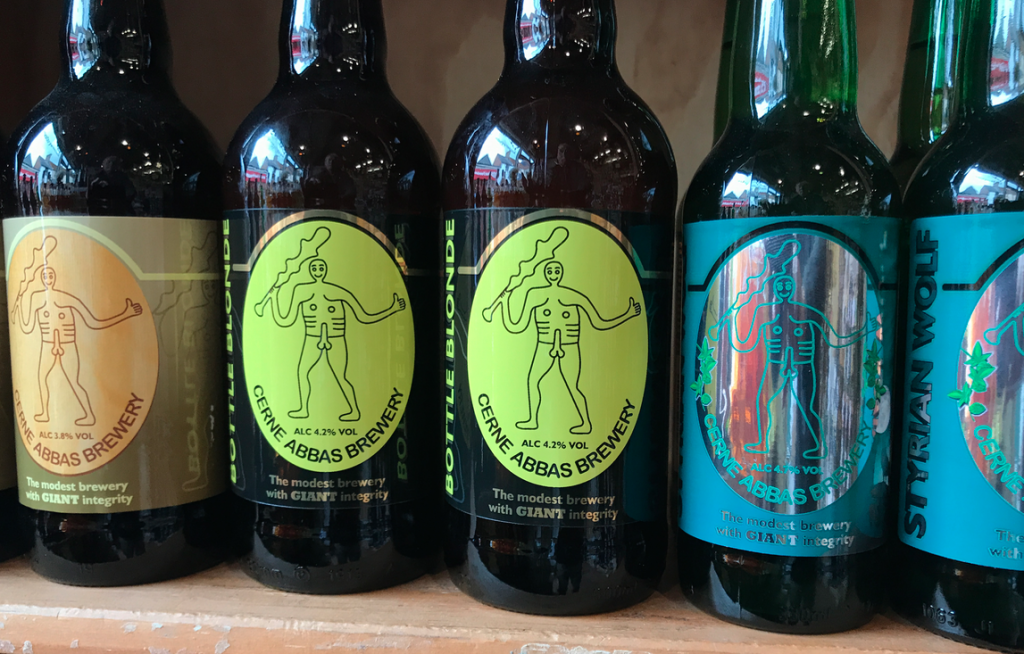 The phallic chalk figure of the Cerne Abbas giant adorns the label of the Cerne Abbas Brewery – ” the modest brewery with giant integrity.” Ahem. Their bottled beers are a favourite of Shaftesbury Wines, with six or more on sale – David’s favourite is the Blonde, a 4.2% number at £3. Only in production since 2014, the brewery won its first CAMRA festival that year and its beer was served in the Houses of Parliament. The water is filtered through green sand and the barley comes from Cerne Valley.

David’s other preferred brewers are Gyle 59 of Lyme Regis, which has four cask and 10 kegged ales, and has now opened a craft bar in the town. “Spring-fed, log-powered, propane-driven, unfined, hazy crazy artisan beers,” is the strapline. Besides the two craft brewers, he also stocks Palmers, brewing beer in Bridport since 1794.

And news just in: David has just started stocking The Wriggle Valley Brewery in Stalbridge, just 10 miles west of Shaftesbury, and one of the finalists in this year’s Taste of Dorset Awards. You can buy direct from the brewery: they rotate about 10 beers, so check what’s available. 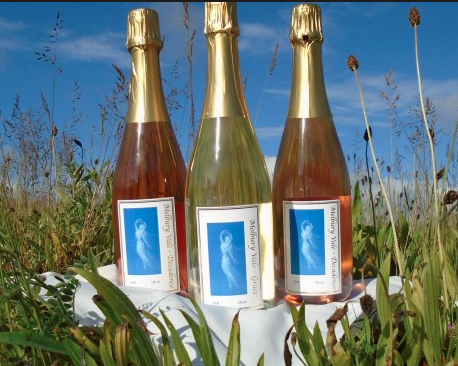 Just a mile south of Shaftesbury is the Melbury Vale Winery, a small family-owned business. An on-site winery was built in 2013 and has encouraged vine planting in the area – some 5,000 new vines have been planted. At present, some wine is bought in and blended.

David stocks their wine and “has done for ages,” he says. There are five wines (three whites, a red and rose) and two sparkling: Grace and Decadence. The last release sold out in six months. The wine ship is open on Fridays and Saturdays from 11.30am to 6pm, and as of this month, the winery has opened an online shop.

MV also produces cider and on October 21 is holding a community apple pressing day, starting at 10am. It also has a selection of liquors, fusions and brandies.

Other Dorset wines recommended by David:

Furleigh Estate: Their wines “are excellent,” he says. It’s expanded to 30 acres of vines on chalk. Countless awards, a visitor centre, vineyard tours and accommodation on site in Bridport near to the Jurassic Coast. Some 80% of production is sparkling wine: all its wines are made from Dorset grapes.

Dorset has also embraced the gin revolution, with four distilleries in the county. There are also seven gin producers in Somerset, including David’s own favourite (which he stocks), Newton House Gin near Yeovil. All four Dorset gins are stocked: Conker from Bournemouth, Lilliput (Poole), Pothecary (Christchurch) and the newest, Fordington (Dorchester). 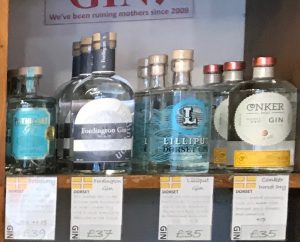 * Conker was Dorset’s first gin, and is based on London gin, says David. The company prides itself on ‘no gimmicks, no fuss” and David himself adds: “It won’t surprise you.” The botanicals include Dorset elderberries and samphire, with gorse flowers from the New Forest – from where the spring water also derives. Of the four Dorset gins, David votes for this “classic style of gin.”

* When Pothecary Gin started in 2016, it sent two samples to a contact at the San Francisco World Spirits Competition. The gin won two golds, so “it’s pretty darn good,” points out David. It was set up by two friends with long experience in the business. It includes five botanicals and took a long time to design: the stopper alone took three months.

* Lilliput Gin is “quite savoury,” says David. “They wanted to reflect the smell of the sea.” Based in Poole, close to the harbour, the distillery only began production this year, using just four botanicals: rosemary (grown in Dorset), thyme, basil and olives.

* The youngest Dorset gin, Fordington, is run by the busy Ros Helmes, ‘the Queen of G&T’ as David dubs her. This is a London gin based on absinthe botanicals, which makes for a distinctive taste. It retails at Shaftesbury Wines for £37, slightly more expensive than Lilliput and Conker (£35) but cheaper than Pothecary (£39).

Yes, the next phase in spiritual resurgence is in vodka: and Dorset has two distilleries. Porter’s Perfection is the name of an apple, and is one of the ingredients of the vodka made on Liberty Farm in West Dorset. It was developed with the help of Lloyd Brown, mixologist at Venner Cocktail Bar in Bridport, who launched the spirit in his bar in May.

Black Cow Vodka has been around in West Dorset a little longer, enough to cause headlines in 2015 when rival Chase Distillery questioned claims that the product derived purely from cows. Black Cow’s Helen Watkins countered: “I can very safely say that Black Cow Pure Milk Vodka is just that – a vodka made only and entirely from milk. We use a neutral whey spirit and everything in our bottle originates from a cow.” Chase is now said to be a suitor in wishing to buy Black Cow…

* Porter’s, Black Cow and Lilliput are the finalists in the Best Vineyard or Distiller category in the Taste of Dorset Awards 2017.

2 responses on “Cheers! Where to find the best drinks in Dorset”