LORENZO Ferrari has been working Gold Hill for 25 years. Not continuously, you understand. But if anything needs doing on the hill, it’s a fair bet that Dorset County Council will call for Lorenzo.

He works for the DCC but is only called on to repair listed structures, mainly bridges. And Gold Hill has been in need of some love and attention for some time. “It’s gotten so weedy, people have been calling it Green Hill,” says one local shopowner.

The hill, which is 750 years old, is invaluable to Shaftesbury as a tourism magnet. Hundreds take pictures at the top of the hill every day in summer: it ranks second-only to Durdle Door as the most photographed site in Dorset on Instagram. (Have you noticed there are no cables or TV aerials on the hill? They are banned).

The visitors bring income to the town, supporting local businesses and by extension supporting local jobs. But Gold Hill hasn’t been cleaned up for seven years, and it showed. Then Shaftesbury got lucky.

With councils pleading poverty, Shaftesbury Tourism applied to be one of the town’s beneficiaries of Tesco’s Bags of Help project, whereby the 10p then paid by customers for plastic bags was redistributed to community projects. The appeal to help clean up Gold Hill worked, with Tesco making a substantial grant towards the project. 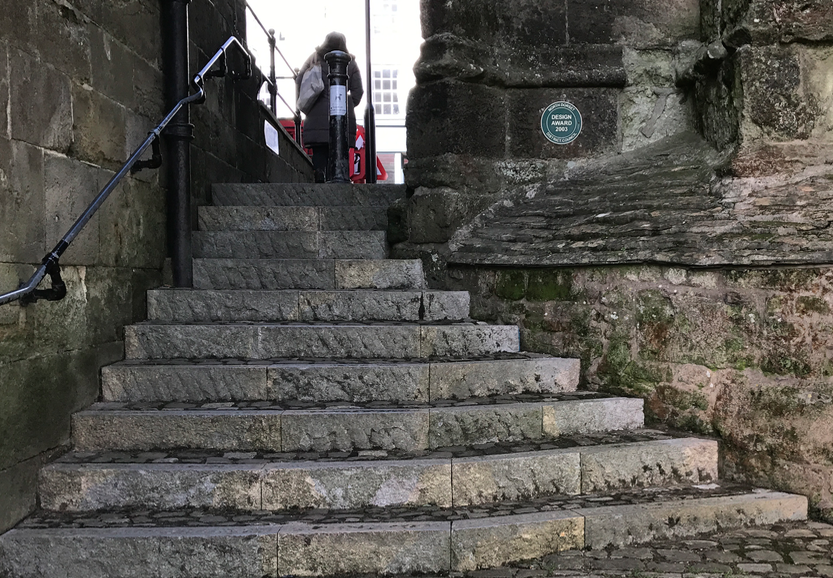 Cue Lorenzo and DCC colleagues. He lifted and relaid cobbles over the years, and in 2003 he built the steps between the Town Hall and St Peter’s Church, which had previously been a steep ramp (photo, right). He’s also repaired shoddy work left behind by utility companies working on the site.

There have been a number of other issues, he says. Traffic on the hill, particularly when climbing, very gradually lifts and tilts the cobbles upwards. Also, silt and mud coming down the hill had blocked the gullies and drains, and encouraged weed and grass growth.

The gullies had filled with dirt, to the point that the surface was level with the cobbles. Now both sides have been cleaned up, the soil and vegetation scraped away and the drains unblocked so that the water can flow where it should. The areas around the bench seats down the hill have also been given a makeover, as has vegetation on the old retaining Abbey wall.

The “most needy” stones have also been lifted and relaid, with Lorenzo wary of lifting too many and creating further problems. The cobbles are made of Shaftesbury green sandstone, or Forest Marble from Stalbridge. Where a cobble is missing, Lorenzo fashions his own to fit. “It’s fantastic: nothing else like it in Dorset,” he says, with evident pride in his work.

In the second tranche of work, effective spraying of the remaining vegetation will be carried next Spring, with the hope it can be repeated every year. The hardwood posts supporting a handrail down the hill will also be rubbed down and revarnished at the same time – all in time for next summer’s invasion of tourists wanting to take their photo at the top of the newly-spruced up Gold Hill.

One response on “Cleaning up Gold Hill in Shaftesbury”