SHAFTESBURY has a very good collection of hotels, cottages and B&Bs. But as the town sits on a hilltop, there isn’t a great deal of room to innovate with glamping options. Happily, there is a great deal of space in The Blackmore Vale and Cranborne Chase surrounding Shaftesbury – and there has been a considerable amount of innovation in recent years.

From a list of 12 options in summer 2017, we have now uncovered 20 locations close to Shaftesbury which offer glamping, from luxury safari tents to a converted double decker bus, eco pod and shepherd huts with hot pools.

Many have spectacular views and settings, in oak woodlands, deer parks, kitchen gardens, equestrian centres and working farms. And they all add to the wealth of accommodation choices in North Dorset, alongside a number of AirBnB options. Come and stay in north Dorset for a short break, or a full family holiday: we’re halfway between London and Cornwall, just off the A303, and within easy reach of Dorset’s world famous Jurassic Coast.

Black Pig Retreats
Three luxurious safari tents overlook the Blackmore Vale with wood-burning stoves, hot running water and king-sized beds. Two sleep six, the other sleeps four. There is also a Straw Bothy with wood burning stove and furnished with rugs and sofa which sleeps two: a ‘Chuck Wagon’ with WC and kitchen is across a small footbridge from the Bothy plus an outdoor shower with hot water. Dogs are welcome in the tents. There are horses, sheep, chickens – and two large black pigs. A week in a six-berth tent in June, 2020, would cost around £750, or around £620 in the bothy.

Loose Reins
Visit England’s 2018 Excellence Awards included Loose Reins as being in the Top Three new tourism businesses in the country… It’s an established riding school in Shillingstone (bring your own horse, or hire) but is finding that many guests simply want to get away and enjoy the space – the strapline is Stay, Ride, Discover. It’s 12 miles south of Shaftesbury and has three canvas lodges (sleeps six) or three wooden cabins (sleeps four). At the base of the long-distance Wessex Ridgeway trail and close to the North Dorset trailway (a disused railway line), the combination means a wealth of trails with a comfy stay in Wild West accommodation (hot showers, fire pits, porch, rocking chairs and marshmallows). A week in a cabin in June costs £990: short breaks from £580.

Safari Glamping
Two very popular canvas, fully plumbed-in ensuite tents in a woodland orchard among 50 acres of Stalbridge Park, 10 miles west of Shaftesbury. Gin and tonic provided, as are hammocks, fire pit and sunloungers. Riding (£95 a day) with a guide (£12 an hour) and other adventure activities also available such as clay pigeon shooting, bushcraft and foraging. Or they can arrange a hot air balloon or art class on request.

Pythouse Kitchen Garden
The walled garden and restaurant have long made this a very popular destination, six miles from Shaftesbury, just over the border in Wiltshire. It is also a wedding venue. In 2018 Pythouse added six bell tents, primarily aimed at wedding and event groups, but available to hire singly for £135 a night, based on two sharing and including breakfast. Hot showers, smart loos – and a cocktail bar in Pythouse. Or you can hire the lot – 24 beds at £110 a bed, including breakfast.

Caalm Camp
Six yurts, a cottage and conference space on an old dairy farm in Stour Provost, a village six miles west of Shaftesbury. Each yurt sleeps four, has its own woodburner stove, shower room and loo in the Old Hay Barn, and use of a new kitchen with individual fridges. Chickens (plus visiting deer, rabbits and pheasants) on the farm, a lounge, kids’ play area. It was awarded best glamping site in the south-west in 2017 by camping.co.uk and is open year-round. Two or three night weekend breaks, mid-week breaks (Monday to Friday) and week-long holidays on offer – a week in June costs £695.

Home Farm Camping
Two yurts and several bell tents are found at Home Farm, which also has its own farm shop and tearooms serving breakfasts, lunches and teas. Hen groups are encouraged to live it up at this remote spot outside Tarrant Gunville, and hosts Paul and Abi will lay on a raft of activities, such as massages, wine tasting, paint balling and beauty treatments. A group of up to 18 hens can take over the whole place. For families, ducks, goats, chicken and pigs will divert the kids. From £85 a night.

Bloomfield Camping
Five yurts (one new for 2020), each sleeping up to four people, in seven acres of field and pond, each with its own kitchen and covered eating area. Showers/loos in shared block with washing-up facilities. The ponds have been cleared to allow fishing this year, the birdhide rebuilt and a nature hut added. It’s a 10-minute walk into the village of Childe Okeford, eight miles south of Shaftesbury, and its award winning Goldhill Organic Farm Shop (and two pubs). The peacocks are all called Dave. It is very popular, with 90% occupancy in 2017. Prices are £300 for three nights in June, or £650 for a week. 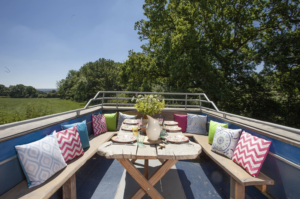 Stock Gaylard
One of the first places to offer yurt glamping in Dorset, Stock Gaylard is a sprawling 1,800 acre estate including 300 acres of oak woodland and a deer park, with all yurts handcrafted with wood from the estate. There are two groups of three, with separate living space yurts – Withybed (three nights from £600) sleeps up to 16 and Brickles, 12 (three nights from £575). Both have woodfired baths and campfires. Meanwhile, Parson’s Camp (three nights from £550) sleeps 11 in a converted double-decker bus (five people), a bunkhouse (four) and shepherd’s hut (two): the bus has a kitchen and the top deck is an open dining space (see photo). Finally, two nights in Sawpit’s Wagon costs from £160 – sleeps two). The whole site is plumbed with mains water; each site is at least five minutes walk from each other; they are solar-powered; there’s no wifi and dogs are welcome! 12 miles south-west of Shaftesbury. 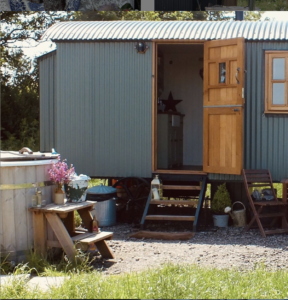 Farmstead Glamping
Two high-end shepherd’s huts were sited on this Sturminster Newton farm in 2017: the Pleasant Pheasant and The Happy Hare. Both have en-suite bathrooms with flushing loos, a double bed and gas. They also have a hot tub and fire pits – and a cream tea on arrival. Both were made by Dorset hut builder Plankbridge. It costs from £80 a night: seven miles south-west of Shaftesbury. 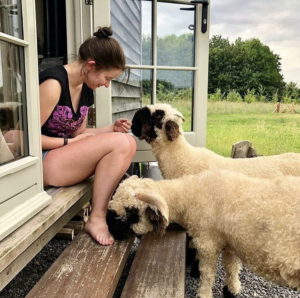 Dither & Faff
You will be greeted by Gary and Kirsty, their three kids plus sheep, hens and a flock of inquisitive alpacas. Two hand-built, oak-framed shepherd’s huts (wheels from a Bridport foundry; frame made in Dorset) were installed in 2018 on Little Hains, a working farm in Marnhull, a village known by Hardy as Marlott, home to Tess of the d’Urbervilles (see Hardy in North Dorset), eight miles west of Shaftesbury. Treats and eggs on arrival, big sunsets. One hut (Dither) has a hot tub, from £100 a night; Faff from £82.

Lawn Cottage
In Stour Row is this B&B with three guest rooms, which has now added the choice of a simple shepherd’s hut with a double bed. Folding foam beds can be supplied for children/friends. There is heating and power but no cooking facilities: the loo and shower is available in the B&B, a short step or two away. A breakfast hamper in the hut – or the full works available in the house: £90 a night.

Horders Farm
A second wooden shepherd’s hut (Badger’s, built on the base of a WW2 gun carriage) has been added to Angel for 2018 on a working farm with sheep at the base of Melbury Hill (two miles south of Shaftesbury) overlooking the Blackmore Vale. A breakfast hamper with home-made bread is supplied, the hot water and shower are solar-powered, there’s a wood-burning stove and a compostable loo. It’s £80 per night (half-price kids under 12). No dogs allowed.

The Old Forge
The Old Forge, just south of Shaftesbury,  has two shepherds’ huts (Sam and Mabel) and a 1934 gypsy caravan (from £80 per night, minimum two nights) alongside rooms in the house. The award-winning breakfast includes their own free range eggs, homemade marmalade, local honey and apple juice from the orchard. There are also  three dogs, a cat, two horses, one donkey and ten chickens on site.

Ash Farm
A large shepherd’s hut on an organic deer farm near Stourpaine and in the lee of Hod Hill. There’s a large bed, kitchen and a lot of space to yourself on a site next to an orchard and a mile or more down a track. £95 a night.

The shepherd’s hut (photo, right) is found on AirBnB in the grounds of Cann’s Flour Mill, a long-established working mill producing organic stoneground flour in he village of Cann, just a mile south of Shaftesbury. The hut overlooks the millpond, and there is a flushing loo and hot shower across the yard, next to where Panary founder Paul Merry holds breadmaking courses. There is also a room to stay in the mill. The hut costs £75 a night, including breakfast.

Eco Glamping Pod
Get away from it all in a tiny AirBnB wooden pod for two with composting loo and shower shed set in a wildlife garden with pond (hence no children allowed). It’s a complete getaway close to Shaftesbury and the pub/village shop in Ludwell. Host Gabriella is clear: “The Pod is tiny. Think of it as a two berth wooden caravan. It really just has the large bed, there is no table on the inside, but a small kitchen area with sink and hob.” From £37 a night.

Melbury Vale winery
Nice touch: your own pod with a glass of wine from the grapes beside you. There are three timber barrels available at Melbury, named after the vines: Pinot Noir, Solaris and Rondo, set on the hillside with the vineyard just above. Each barrel sleeps two in a double, and has an interior seating/dining area as well as exterior verandah seats. £59 per night, minimum two nights at weekends.

Dorset Country Holidays
This place offers nearly everything: yurts, domes, bell tents, cabins, shepherd huts, airstreams and retro caravans, all within one area of a larger holiday park with toilet and shower blocks just three miles west of Shaftesbury. New for 2018 are deluxe glamping packages, including towels, gowns, bedding and a coffee machine plus logs and charcoal for your accommodation’s fire pit and barbecue. Washing-up and laundry facilities on site. Aimed at value glamping, with option to bring your own linen. One night stays available, dogs welcome.

View all our major events