Shaftesbury is the gateway to three marathons: Cranborne Chase, the Rushmoor Estate (including Larmer Tree Gardens) and the North Dorset marathon, which wends through 10 villages and outstanding countryside. Dorset’s White Star Running operates several more events besides, from 24-hour events to running with kids and dogs. It’s serious, and fun.

There are also now two parkruns within 10 miles of the town, the latest on an airfield where four Tiger Moths and a Russian-owned acrobatic team are based – bring your binoculars when heading out for a 5km Saturday morning run.

There is so much choice to run fast or potter slowly. And where there be hills and running, there be lots of magnificent established walking trails. The Wessex Ridgeway and North Dorset Trailway (a former rail line) are close by, while the 50-mile White Hart Link is a trail linking the five North Dorset towns, including Shaftesbury. It’s now taking shape and being trailmarked. Some sections are complete, and the route will be complete in 2021.

Shaftesbury itself has a superb tree walk, and nearby Gillingham – on the main rail line from London to Exeter – has established walks around the old hunting forest of King John.
Find out more below and bring your walking and running shoes to Shaftesbury! We look forward to welcoming you.

IN October, there is a marathon and half-marathon on Cranborne Chase that starts and ends at a bar – The Penny Tap, in Sixpenny Handley. It’s an indicator of how White Star Running (WSR) likes to operate.

Its manifesto states: “We are a group of friends who like running, organising races with a cake and a drink afterwards. WSR aims to organise fun, sociable and value for money running events, for runners of all abilities, with no corporate claptrap. We believe in tough races, friendly marshals, awesome views – and beer that is cold.”

The philosophy has held true since WSR stepped out five years and more than 100 events ago: not just marathons, but half-marathons and 5/10/20 milers. Oh, and chaos and kids races, frolics and ultras. This is not your normal running club.

They ran a Cider Frolic race at Cranborne Chase Cider this year, and plan a Dark Dorset half-marathon in November with runners wearing head torches. Discos, hog roasts and barn dances are regular add-ons, and runs with dogs and children also feature.

Most brilliantly, the marathons have Lovestations where runners can have a cider or scotch egg or just a hug (while the marshalls assess how able you are to carry on – many of the events are demanding, and Dorset is quite lumpy.)

WSR events have proved hugely popular – and best of all, they only operate in Dorset, including races in North Dorset on Cranborne Chase and at Larmer Tree – both within 10 miles of Shaftesbury. In March 2019, there will be five Ox races on the Rushmore Estate: a marathon, half-marathon, 10 and 20 mile runs and a Dark Dorset Race.

Such is the popularity of the Dorset runs that the company has attracted 16,000 people to the county, with campsite accommodation offered for all the late spring and summer events. “We work hard to create races that are set in the best scenery our beautiful county can offer, running in places no one else runs,” says Andy Palmer, who set up WSR.

Read more: An interview with Andy in The Guardian in 2016 on what prompted him to create WSR. 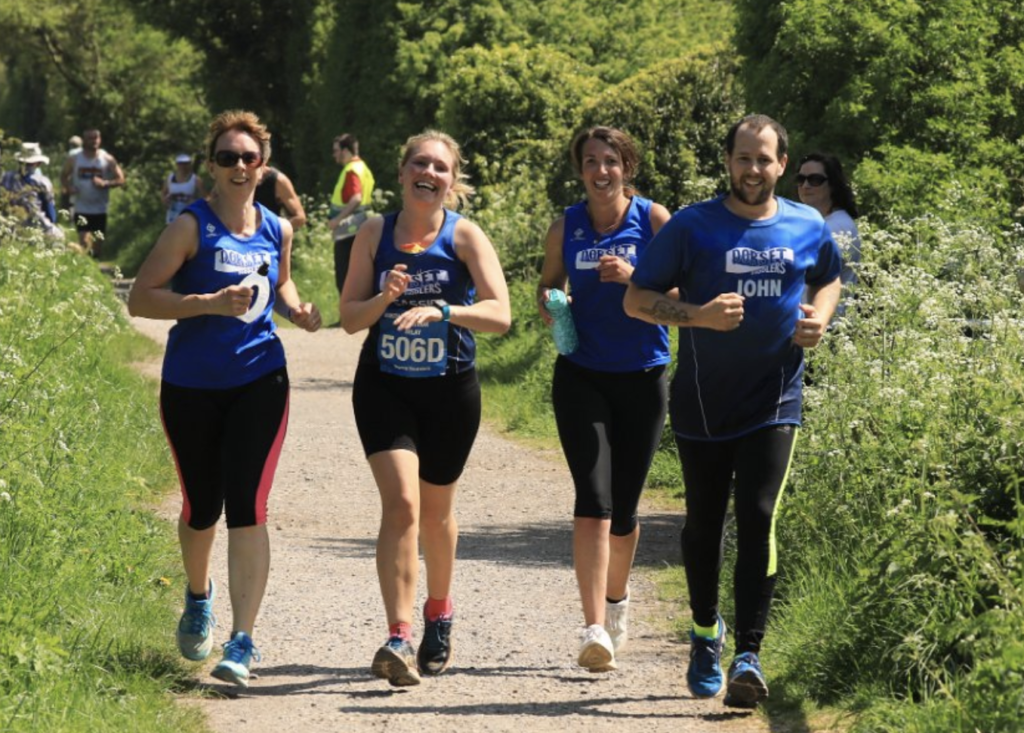 THE race, hosted by The Dorset Doddlers runners group, marked its 10th anniversary in May this year when 300 runners set out on a route that takes in some of North Dorset’s most lovely villages south and west of Shaftesbury: Hinton St Mary, Marnhull, Stalbridge, Todber, Stour Row, Margaret Marsh, West Orchard, Farrington, Child Okeford and Hammoon.

It started in Sturminster Newton with bacon rolls and fireworks and, this year, included live support from singers, ukulele band and a brass band. For more information email the race secretary. Entries for 2019 open in November.

The Dorset Doddlers have, in their words, been running around in circles since 1983. The group has more than 100 members, has training nights on Thursdays and stages regular events throughout the year.

IT started in west London in 2004 when 13 runners spent an hour running 5kms through Bushey Park. Paul Sinton-Hewitt was the founder and, in a 2014 interview with Strava, he laid out his vision: “Running is so close to walking that pretty much everyone can do it. My view was that there should be no kind of Big Brother authority, it was more about making it available to everyone. Right from the word go we refused to call it a race, it was a run, and we said you can run with your dog and you can push a buggy.”

Last week, there were 542 parkruns across the UK (and there are as many overseas), with an average 200 people meeting every Saturday at 9am to run or walk 5k – often with a buggy or dog. And now there are 543.

The newest took flight last Saturday at Henstridge Airfield, eight miles west of Shaftesbury, when 115 strode out to run the mainly grass track – with warnings to stay off the active runway. Once registered, runners turn up with their barcode – on finishing, their time is recorded and barcode scanned to match runner with time: stats are a big part of parkruns, though don’t call it a race.

It’s more than that: it’s still about Paul’s vision of a community encouraging and supporting others to get active. Of the 115, a quarter were taking part in their first parkrun. Others were parkrun collectors seeking a new venue, like David Connolly from Coventry, who only found out about Henstridge the day beforehand.

In a report, he says: “The joy of parkrun is that once you have that barcode you can run at any parkrun in the world: the other side of the coin will be how many will turn up? So I imagine this week’s Run Director must have been thinking will anyone turn up? If hundreds turn up would we cope? Will it just be tourists visiting? Will it bring in any new runners? Looking back at the results, I can definitely say it was a success.”

And he added: “What a great café Henstridge Airfield is blessed with, an honesty pot for coffee and cakes all very reasonably priced and a smashing cooked breakfast – I can highly recommend the bacon and egg roll. Before getting into my car, a Tiger Moth took off from the runway. Definitely something no other parkrun can claim. Thank you for such a lovely friendly parkrun and all the best for future runs.”

* The other parkrun in North Dorset is at Blandford, 10 miles south of Shaftesbury: Salisbury, Poole, Shepton Mallet or Yeovil have events and are within 20 miles.

FANCY A GOOD WALK INSTEAD?

THE North Dorset Walking For Health scheme has trained over 50 volunteers who now provide weekly Health Walks in Shaftesbury, Sturminster, Blandford, Shillingstone, Gillingham and Sherborne. These are opportunities for those who want to walk a short distance of 1-2 miles at a steady pace in a friendly group.

All walks are free and local GP practices are supporting the scheme as they are keen to promote the health benefits associated with regular physical activity. If you would like more information please contact Keith Harrison, Scheme Coordinator on 07825 691508 or email: keith.harrison@dorsetccg.nhs.uk.

Read more about the group:

* This is Alfred: Why walkers are joining Shaftesbury’s fastest growing community group