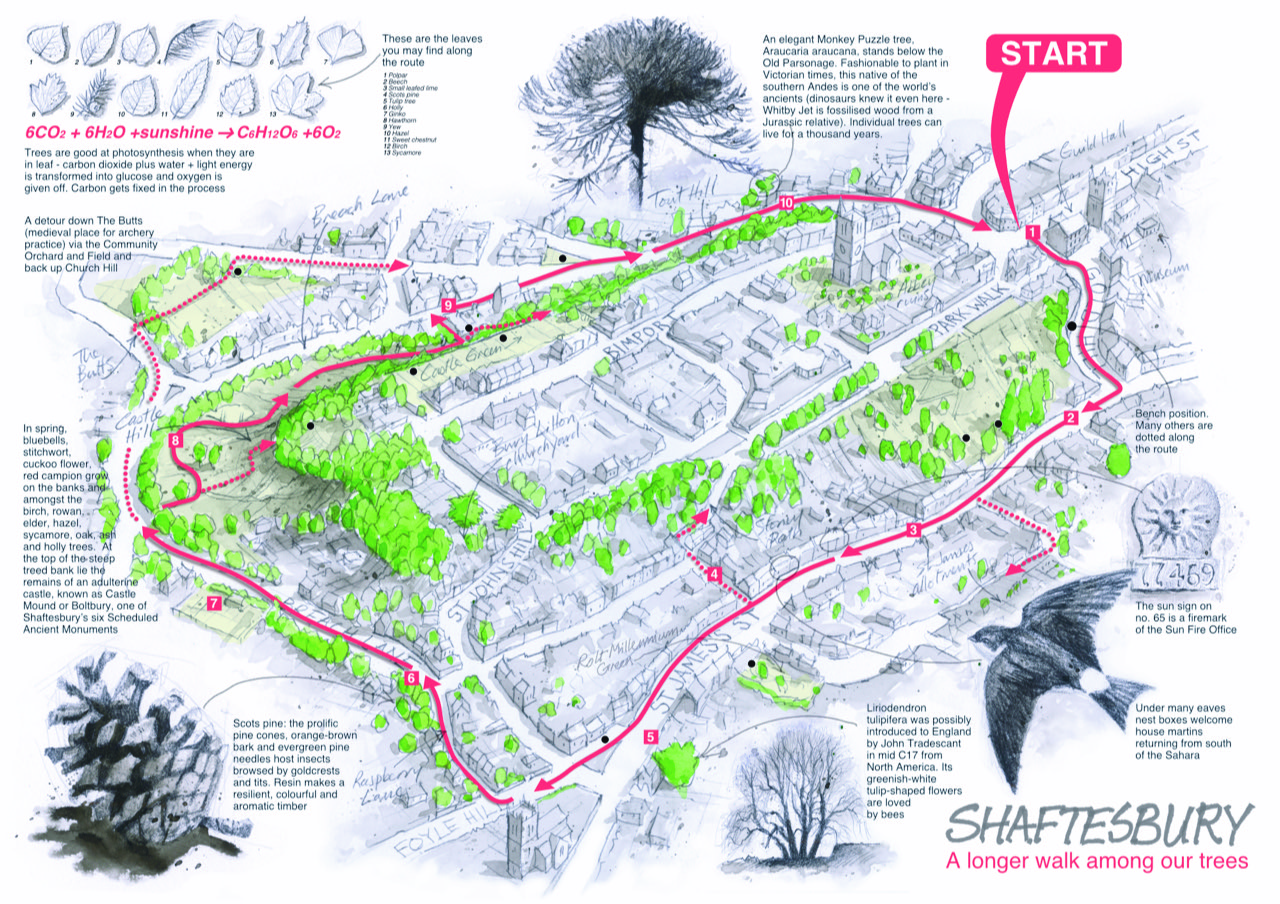 IN June, 2018, the Shaftesbury Tree Group published a walking map taking in the best examples of old and important trees in the centre of our hilltop town (see link below). Now the group has created a second walk, based on a circular amble around the town’s perimeter. Both maps are brilliantly illustrated by landscape artist Gary Cook, who lives just outside Shaftesbury.

View and read the first map: Shaftesbury: walk landmark trees with glorious views
The story of the second map: Read (and listen to) an interview with Gary Cook, plus Sue Clifford and Angela King from the Tree Group

A LONGER WALK AMONG OUR ANCIENT TREES

This walk may take one and a half to two hours: it depends on how many gates you lean upon and muse. It begins and ends with steep hills and in part follows roads, some without pavements. We circuit the base of the greensand spur on which Shaftesbury’s medieval centre stands, more than 100ft/30m above.

Even at the bottom of the hill there are long views outwards to Melbury Hill, Duncliffe Woods and across the hedged fields to the rim of chalk hills that contain the Blackmore Vale. Glimpses up the slopes reveal steep woodland cover, some planted – the pines and beech, some spontaneous growth – birch, ash, sycamore, field maple and more.

1 Enjoy the framed view from the top of Gold Hill, the hedgerow trees of the Blackmore Vale and the tall beech whilst descending to the lower town (sub – urb) settlement of St James. Before you lies the round-topped Melbury Hill. 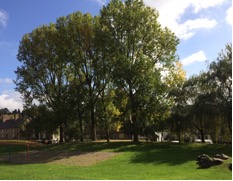 2 Turn right along St James’s Street. Hybrid black poplars (photo, left) tower over the street opposite Ye Olde Two Brewers pub (the last of five or more inns along here) in The Park. They dominate the sky, their red catkins give way to honey coloured leaves which whisper in the breeze.

People remember the poplars being planted about half a century ago to help reduce the dampness in the cottages below. On the steepest slopes, by Gold Hill, cherry, apple and pear trees have been planted amongst the protective bramble, for insects and later for us.

The Park, previously a tenanted area for grazing, was donated in 1919 “to the corporation in trust to allow enjoyment thereof by the inhabitants of the Borough in perpetuity as an open space”. Upslope a little, beside the swings, two statuesque lime trees reach 70 feet/20 metres. The soft scent of their flowers draws people as well as insects. 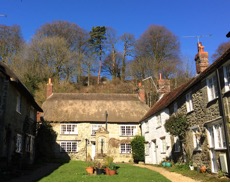 3 Take frequent pauses to look right and savour the trees on the steep slopes dominated by sycamore, giant beech and Scots Pine, especially by Pump Yard (photo, left). The roofs of St James’s were mostly of timber and thatch.

The sun sign on no. 65 is a firemark of the Sun Fire Office, (the oldest in the world – 1710). It boasted its own fire brigade to protect its clients. A fire pump dated 1744 is kept in Shaftesbury Museum at the top of Gold Hill. Even in 1955 a fire took its toll, no. 77 and six adjoining cottages were reclad with tiles. Under many eaves, house martins’ boxes support “this guest of the summer” and its breeding, whilst trees, such as the sycamore, harbouring aerial insects, help with summer feeding.

4 At Tanyard Lane you could turn back up the hill via Stoney Path to Park Walk amongst pines and deciduous trees. Or, a little further along on the left, take a seat in the Rolt Millennium Green – memories of old allotments persist in the apple, pear and plum trees. 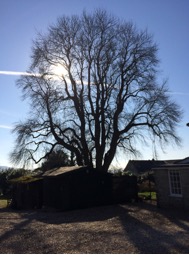 5 Continuing on the level towards the church a magnificent, multi-stemmed tulip tree (photo, right) in a private garden overtops The Chantry to the south of the street. It has a girth of 25-30ft and is thought to have been planted in the 1790s. It is one of the most spectacular trees here, rivalling those at Stourhead.

Reaching the junction with St John’s Hill, take great care crossing the road into Foyle Hill (Foul Hill on old maps) keeping St James’s church to your left. The churchyard yews are English (spreading) and Irish (fastigiate/upright). Opposite, a yew and tall oak tree grow in the walled garden. After a few yards, turn up right between the tall greensand walls of Raspberry Lane.

6 After 100yds/90m, on the left, stand three tall Scots pine trees, our only native pine. Its natural range runs from Scotland and Spain to Siberia. Incline left along Breach Lane past two horse chestnut trees on the bend where imposing lime, pine, sycamore, beech and oak were also planted in Victorian times when Milland House was the rectory.

7 As a slender copper beech comes into view, note opposite how Shaftesbury Home Grown (open on Friday and Sunday mornings) has laid its hazel and willow hedge, reinvigorating low growth and making it an attractive place for small birds to hide their nests from predators. 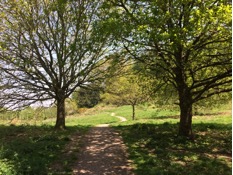 8 Where roads meet you can turn right through the gate into Castle Hill. Four climbable young oaks (photo, left) mark the threshold of this impressive area of grassland and wooded slopes [12+ acres/5 hectares] with Castle Green on top. This land, managed by the Town Council, was gifted as open space after the town was sold in 1918/19.

You may lengthen your walk by heading further along Breach Lane, left down The Butts and into Donkey Field Community Orchard, returning up Church Hill to Enmore Green. Or, after the young oaks, you may shorten it back to the top, right fork up beside the Castle Mound to Castle Green, up steep “sleeper” steps.

Staying below, the left fork will take you along the spring line where the Greensand meets the Gault Clay. Pussy willow (goat willow/sallow) enjoys the pond sides and croaking frogs rouse attention in spring. The slopes were grazed until the 1950s; the picture now is of spontaneous regeneration. Hazel is yellow with catkins in February and one of the delights of oncoming spring is the shapeliness of the winter trees as the sun returns to these northerly slopes.

Early spring brings the blackthorn (sloe) and then wild cherry blossom. In May the hawthorn is white with flowers, and amongst the birch, sycamore and holly, the slope is alive with birds nesting and foraging. Look out for bees and flies of many kinds, as well as butterflies and dragonflies. What you will not notice is the chatter that proceeds through mycorrhizal fungus – the subterranean, sophisticated communications network between trees and plants.

9 At Rachel’s Oaks, three young trees in metal tree guards planted in 2018, turn left down the narrow footpath to return to Breach Lane and turn right through the settlement of Enmore Green.

Or, continue and make your ascent up the giant steps to the right and the east end of Castle Green. As you pass The Fountain Inn, a reminder that Shaftesbury relied on its lower neighbours for water, head uphill. At Yeatman’s Lane, on the left, a sweet chestnut tree emerges from a tall beech hedge which itself runs into a high, manicured yew hedge.

Progress up Tout Hill (photo, left) via the stone steps, crunchy with beech mast over winter. “Tout” suggests lookout or vantage point, and as you climb you will see why if you pause and turn around. Spare a thought for the horses – here was the Old Coach Road, the main route between London and the south west, the Great West Road.

10 An elegant Monkey Puzzle tree, fashionable to plant in Victorian times, towers over the Old Parsonage. Opposite, big sycamore and huge beeches grow above an impressive wall. The road was widened and made less steep after the Napoleonic Wars. Funds were collected to provide work for local men, note the wall inscription – T. Bennett, 1817. At the top take care turning right into the High Street and south back toward the Guildhall at the top of Gold Hill. THE END

Funding for the walk map came from Shaftesbury Charitable Trust, Shaftesbury Town Council and The Grosvenor Arms. A copy of the map is available in Shaftesbury from the Tourist Information Centre, Post Office and most accommodation and attractions.