Listen to This is Alfred’s podcast: Shaftesbury’s Hovis Loaf Is Back After Nesting Robin Delays Repairs

But on Saturday morning, Anne was able to say at an official relaunch that: “It gives me great pleasure to see the Hovis Loaf, built nearly 40 years, ago back in its rightful place on Gold Hill.” It has been sited back on the hill itself, on a level base and tethered to a wall.

She and Shaftesbury Mayor Piers Brown performed the unveiling ceremony. Among the guests were Peter Trigger, 88, who made the original loaf in fibreglass, and Roger Pope who made the steel frame. The loaf was the brainchild of Leo Williams, also at the launch.

The model is in the care of The Shaftesbury Charitable Trust, which was set up in 1988 to ‘assist with the preservation of buildings and places of historical interest, and other projects which will enhance Shaftesbury for the benefit of both residents and visitors and also for educational purposes.’

Jenny Harding, wife of the late Brian Harding who was the backbone of the charity for many years, was at the relaunch, as was Ray Humphries and Tom Whiteford, who refurbished the loaf, and artist Janet Swiss, who painted its 3D illustration of Gold Hill.

It’s believed to be the fourth restoration of the loaf. Checks this time around showed that while the lower half of the fibreglass model was still pretty intact, the crust was a flaky and cracked. There was plenty of filling, rubbing down and painting: the information signage on top was also restored. It explains why the work took so long – but also because a robin decided to nest in the model, and work halted for three months until the eggs hatched.

Said Anne Giberson: “I hope some of the money raised over the next few years goes towards the upkeep of Gold Hill. Luckily we had a £10k grant from the Tesco bag scheme and have, over the last 18 months, cut down vegetation and tree roots from the wall, relaid a number of loose cobbles and twice sprayed them.

“The last work was to paint the 23 wooden posts down Gold Hill by two volunteers. The icing on the cake of Gold Hill’s resortation is the Hovis Loaf coming home. It is such a great tourist attraction and photo opportunity, which hopefully will be seen on social media far and wide and bring many more tourists to our wonderful town.” 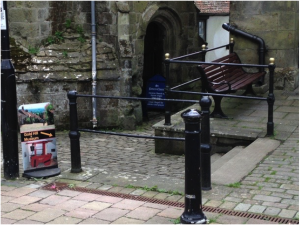 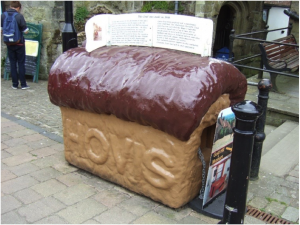 * Jul 2017: Photos (right) – the Loaf is removed from its location outside The Town Hall and taken away for restoration.
* Nov 2017: Cleaning up Gold Hill – a video of specialist Lorenzo Ferarri relaying cobbles on the hill
* Jun 2018: The great Gold Hill clean-up – the day a giant spider machine was used on Gold Hill to clear vegetation
* Aug 2018: The Great Gold Hill clean-up is completed – painting the 23 posts down the hill completed the works.