THERE were several airfields built in Dorset during WW2, as aircraft production moved out of the bombed cities and the Allies geared up for the 1944 invasion of France.

The gliders that landed at Pegasus Bridge on D-Day took off from RAF Tarrant Rushton, while the Americans took over RAF Warmwell for their fighter planes. Henstridge was a Fleet Air Arm training airfield: Seafires, Spitfires and Masters flew from 1943 until 1945.

Today, only one of the five runways remains. But the airport is busy, with the Dorset & Somerset Air Ambulance based here – as are the Yakovlevs, an aerobatics team often seen (and heard) training over the Blackmore Vale.

There are four Tiger Moths based at Henstridge, nine miles west of Shaftesbury. There are only around 200 of these biplanes still registered to fly, and this is the biggest group in the country. Not only that, but they date back to the war and are all still flying in their camouflage livery.

They are owned by Kevin Crumplin, who set up Tiger Moth Training with equally experienced pilots Clive Davidson and Annabelle Burroughes. “We do it for pleasure,” says Kevin.

Their enthusiasm is infectious, and their working week an envious mixed bag of flying. Last week, a father and son flew in formation. “Formation flying is one of the last skills,” added Kevin, “now only occasionally seen, usually at air shows.”

And events. Last September, three of the biplanes flew over Bovington Tank Museum to drop poppies and mark the 100th anniversary of the first tank battle. They also drop half-a-million poppies at Bovington on Remembrance Sunday (minus the plastic bits).

The planes have featured in films and, most recently in a BBC documentary about the weather, Storm Troupers. The planes normally fly around two or three times a day (if the weather is right), usually carrying people like me who had been given gift vouchers for an introductory flight. Annabelle kitted me out in a sheepskin flying jacket and leather helmet and we took off for a 30-minute jaunt.

It was a magnificent day to be flying, particularly in an open-air Tiger Moth above the quilted meadow patchwork of the Blackmore Vale. The noise of the wind is deafening, and I appreciated the tiny windscreen which deflected the headwind. Annabelle sat behind me, explaining over the helmet microphone how the joystick and foot rudder controls worked before allowing me to ‘take control’ to swing left and right while maintaining height and balance.

The joystick is surprisingly sensitive to touch. I blamed the gusts of wind for a few wobbles but the guffaws of laughter from the back suggested otherwise. Then, about 20 minutes into the flight, Annabelle asked if I’d like to loop the loop. Well, there’s an offer you don’t get every day. Yes please.

It was over in maybe 15 seconds, but that’s a quarter of a minute of blurred blues and greens, a total loss of bearings and a mad whooping exhilaration combined with a gratitude that at least one of us had some control.

* Tiger Moth Training operates trial flights lasting 20, 30, 45 or 60 minutes, with prices ranging from £140 to £400. Quality videos of Tiger Moth flights from Henstridge are on YouTube – this amateur video by me, below, might give you a sense of the occasion! 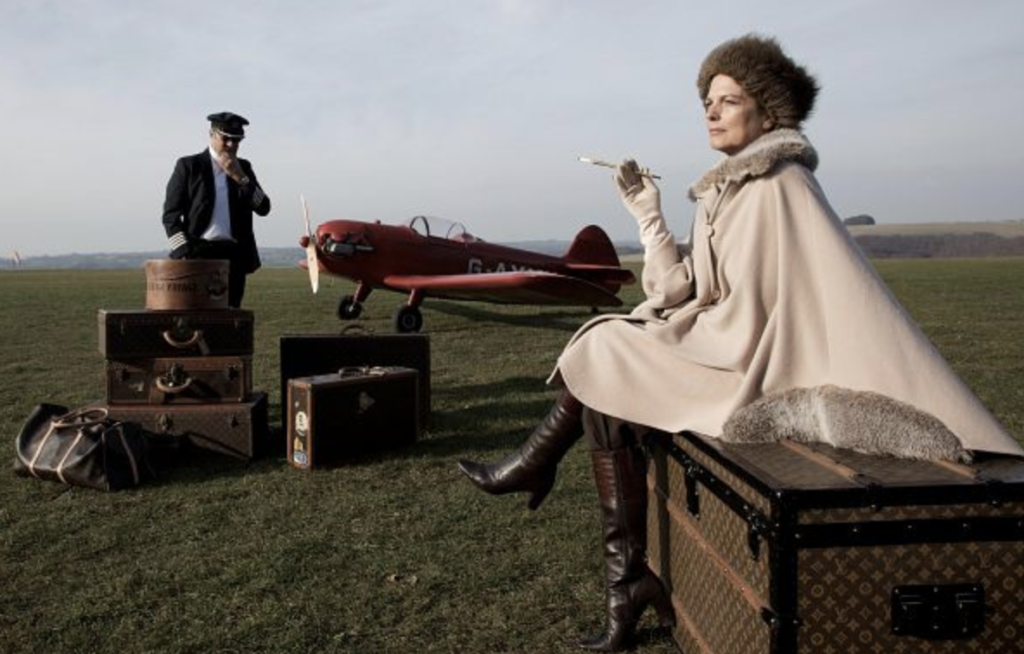 Clive Hughes, the owner and manager,  says that Compton is not only an airfield but also a tourist attraction and local amenity. He’s right there: the restaurant and bar is rated in the Top Five in Shaftesbury on Tripadvisor and serves more than 1,000 meals a week.

The airfield is a tad outside Shaftesbury, as you might expect. But it’s just four miles south, up the zig-zag road to the western edge of Cranborne Chase and with stunning views out over the Blackmore Vale to Wiltshire and Somerset. The walking around here, at Fontmell Down Nature Reserve and Melbury Hill, is also superb.

The family-owned and run airfield was actually only opened in the 1960s, and was bought by the Hughes family in the 1980s. They are still there, and have set about creating that tourist attraction while keeping Compton buzzing as a working airfield.

There are several options for flying, with a range of ‘experiences’ in several types of plane, including a 200mph Harvard Warbird, light plane or a Chipmunk 1950s trainer. And there is wing walking on offer too – best to have lunch afterwards.

With the airfield open to everyone, it’s best to book a meal before visiting – particularly if there is an event. On July 14-15, the British Aerobatic Association holds its annual challenge for the most skilled pilots to demonstrate their routines – while, in testament to the airfield’s sausages, there is a Big Breakfast fly-in on September 16 (breakfast served until 2.30pm).